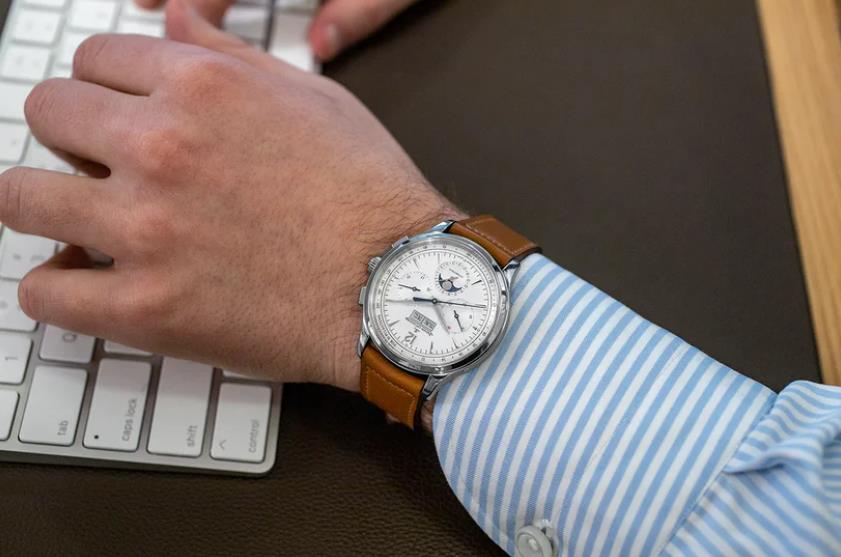 In all the years that I’ve been writing about best fake Jaeger-LeCoultre, I really thought that I’d seen everything at this point. Gyrotourbillons, ultra-thin watches, square Reversos (remember those? the Squadra, gone but not forgotten), lubricant-free high-tech concept watches (the Extreme LAB), complications of every description – well, the list is long. Apparently, however, there is one thing which I have not seen and which nobody else has seen either from JLC, and that is a complete calendar chronograph with moon-phase. Jaeger-LeCoultre says that they have never done one before, and they should know, but as Jon Bues wrote in his Introducing coverage it still comes as a surprise to hear it – if you’d shown me this watch without any introduction and said, “Hey, this is such a great watch and you’ve never covered it in all these years, what’s the deal?” I’d have blushed and felt as if I’d been both unobservant and derelict in my duties as a consumer journalist.

This is all by way of saying, and I mean this as a compliment, that the new Master Control Chronograph Calendar looks as if it has been part of the JLC lineup for a long time. There are reasons for that, of course: The general layout of the watch is very much one intended to appeal to traditionalists, and the combination of these two complications is a traditionalist’s favorite as well. Perhaps the best-known vintage implementation is the hand-wound Valjoux 88, which was produced, at least for a Valjoux chronograph movement, in surprisingly small numbers. The first impression you get of this watch, therefore, is of a timepiece that, if new as a complication to its maker (which I still can’t quite believe) is certainly not new to watchmaking or to wristwatch design.

The Master Control Chronograph Calendar is part of the hot copy larger Master Control Collection, which was relaunched this year with redesigned cases whose basic profile was derived from JLC’s flagship complication for 2020 (at least so far), which is the Master Grand Tradition Grand Complication. That watch debuted with a slimmer profile to the lugs, which had also been opened up (although not actually openworked) with recesses along their flanks, as well as the case middle. The result was a version of the watch that seemed both more in line with the vocabulary of classic watchmaking, as well as more light and graceful. The recesses in the lugs and case middle haven’t been carried over to the Master Control line, and this is all to the good as it would seem affected in the context of these watches, but the sense of subtle grace is still present, helped along by a crisper transition from case to lugs, and a slightly more emphatic sense of geometry overall.

If there is little or nothing to complain of in terms of overall aesthetics, there is also certainly nothing to complain of in terms of fit and finish. While Jaeger-LeCoultre takes a back seat to no one – and I do mean no one – when it comes to the high-end horological decorative crafts sometimes referred to collectively as metiers d’art, there is another, more accessible, and just as important side to its character, which has to do with unostentatious excellence in daily wear mechanical watches. The case details in the Master Control Chronograph Calendar are not an overt paean to the decorative potential of steel; rather, they are intended to form a frame which, while it does not distract from the functionality of the watch, at the same time offers a reassuring sense of solidity and attention to detail should you wish to inspect the watch closely.

I think the dial of the Master Control Chronograph Calendar is exceedingly beautiful and well organized. There are no tricks being played here, in particular – just good, solid, clarity of design. This could indeed easily be mistaken for a complicated gent’s watch from the 1950s, although one thing that gives away the modernity of the watch is the crispness and clarity of the printing and dial furniture, as well as the equally crisp starry background to the lunar disk on the moon-phase display. I think that the dial works as well as it does as much for what JLC decided not to do, as for what it decided to do. The only slight quibble I have with the dial overall is that against the white dial, the highly polished hour and minute hands can sometimes be slightly difficult to pick out, but I certainly didn’t find that to be a fatal issue in terms of on-the-wrist legibility and utility.

The urge to fiddle for the sake of fiddling is very often on display in modern watchmaking, and it seems to become more and more noticeable and less and less successful as prices increase. The problem has always seemed to me to be at its most acute in chronographs, which seem to have the ability to bring out the worst in watch designers like no other complication. In this case, however, the level of detail feels entirely appropriate to the overall identity of the watch, and contributes a great deal to the impression that it gives of something intended to be a daily companion, and not just another more or less static addition to a collection.

For a full evaluation of chronometric performance, we would have had to do a full Week On The Wrist (which I would very much like to do with this watch at some point; I think it merits it and then some), but there is no reason to expect anything other than excellent performance from the movement. The movement, caliber 759, has some new-to-the-collection features, including the use of silicon components in the lever and escapement, and is a column-wheel-controlled, vertical-clutch mechanism; it also has a freesprung, adjustable mass balance, which has become more or less the standard in modern high-grade movements. It looks quite handsome and sturdy through the sapphire display back.

The watch overall boasts very wearable-sounding dimensions – the case is 40mm x 12.05mm and water resistant to 50 meters. You could, of course, object that this would be an even more historically resonant watch in a smaller diameter, but after all, 40mm is hardly a Brobdingnagian dimension, and the width-to-thickness ratio makes for a watch you’d expect to feel quite comfortable on the wrist.

And you would be right. This is an immensely pleasurable watch to wear, and I make no bones about it; I didn’t want to give it back. I don’t generally feel a terribly strong desire to actually own watches, largely because, for many years, it has been my privilege to experience so many of them; I suppose I am rather like a restaurant critic in that respect, who for all they are passionate about food may not particularly feel the itch to own a restaurant. But I think this would be a damned fine wristwatch to wake up to every morning, to look at during the day, to use to mark the passage of the months and moons, and to put down on the bedside table at the end of a long day and have its calmly purposeful, beautifully balanced countenance the last thing I see before lights out.

This brings us, inevitably, to The Unpleasant Matter Of The Bill; in steel, this is a $14,500 watch. I wish it were less expensive, but I think part of that may be because I have been around long enough to remember when, across the board, prices for fine watches from Switzerland were a fraction of what they are today, and I basically wish everything was less expensive. I probably ought to put my Zen Buddhism where my mouth is, though, and cultivate a spirit of, if not acceptance, at least resignation on that score; last I checked time’s arrow only points one way. However, even at that price, you are getting an awful lot: a watch with a handsome diffidence, which is rather rare these days, and which achieves an identity of its own without resorting to either rote aping of a vintage model on the one hand, or novelty effects on the other. Plus, you are getting a watch from one of the most important names in Swiss fine watchmaking, and one whose reputation is based on real horological content to boot – Jaeger-LeCoultre likes to remind us that the company is sometimes called the Grande Maison in Switzerland, but given the firm’s decades-long mastery of every kind of watchmaking imaginable, we should probably let them have that one.

I think the greatest compliment I can pay the Swiss copy Master Control Chronograph Calendar is to say that it does not feel like an attempt to broadcast affluence, or one’s good taste, or to pay homage to something in the glorious past, or to break new ground technically or aesthetically. It is not a showcase for some fantastically demanding craft kept alive through the dark years of the Quartz Crisis by a devoted few; it is not intended to be an Instagram trophy, and it will not (at least, I think not) produce years of frustration in its fans as they idle on waiting lists. Instead, it has a rare, sole ambition: It wants to be a watch, and a damned good one, and at that it succeeds admirably.